Facebook profile pics and cover images are a unique means of expression on the popular social media site. By nature, the two elements are rather detached. The profile pic appears next to every comment or status you add, whereas the cover photo is only seen on your own timeline. But what if you could design the cover photo and profile pic to work together in a single design?

In this tutorial, we explore how to create a cover image where you appear to be holding the profile pic in your hand. It’s a creative spin on using both design elements in a single coordinated design.

If you don’t have the time, you can purchase many different social media templates and Facebook covers over on Envato Market.

Facebook has an interesting approach to laying out the cover image and the profile picture. It’s important to understand some of the limitations before starting the project. There’s nothing more frustrating than having your vision thwarted by a limitation to the medium that you didn’t account for.

There are a few hard and fast rules to know beforehand.

To make the entire process easier, there is a Photoshop file included with this tutorial for you to download and use as a template. Just look for the FB Cover Template.psd attachment.

My concept for this design was to make the profile pic appear to be a photo card I was holding up in the cover image. I used some square pieces of blank white cardstock as props with the intention of compositing photos onto the cards for the final design.

The most difficult shot to get is the photo for the cover image. The dimensions are very narrow, yet wide, which means that the cards will need to be held up in a position that feels unnaturally high.

After getting the shot for the cover image, the next task is to get several different profile shots. Be creative, and use a variety of poses, clothing, and props. It’s important that the different images appear to be visually connected in some way, for example by using the same framing, background, and camera setting.

The template file makes use of smart objects to make certain that the exported files will always be exactly the correct pixel size. But working within the smart object file, it’s difficult to get a feel for overall positioning. Instead, use the template to get the position correct, and then transfer the image into the smart object.

Open FB Cover Template.psd in Photoshop. Then go to File > Place > Linked to deposit the cover photo into the template. Position the photo layer just above the Cover Photo layer.

Clip the photo layer to the cover photo layer by going to Layer > Create Clipping Mask (Alt-Control-G). This constrains the visibility of the photo to the bounds of the cover.

Go to Edit > Free Transform to get the transformation handles to move, scale and rotate the photo until the card aligns with the profile picture box.

It’s rather unlikely that the photo will have the card held at the ideal size and angle for optimal framing. That’s when the narrow confines of the cover dimensions are actually useful. The idea is to use the image twice: once for the hand perfectly positioned, and again for the rest of the image to create a more compelling composition.

Duplicate the photo layer with Layer > Duplicate Layer. Then clip the copied layer onto the previous one with Layer > Create Clipping Mask (Alt-Control-G).

Use the Rectangular Marquee Tool (M) to draw out a selection just around the hand holding the profile card. Then use that selection as a layer mask by going to Layer > Layer Mask > Reveal Selection. There will not be any visible change to the image just yet because of the exact copy just below this layer.

Select the original photo layer and use Edit > Free Transform (Control-T) to position the image in a slightly better composition, ensuring that the other cards are clearly visible.

Select both the photo layers by Shift-clicking on both the thumbnails in the Layers panel. Then merge them together with Layer > Merge Layers (Control-E).

Now that the positioning of the cover image is nailed down, the more intensive photo editing work can be done within the cover photo smart object. Make sure the photo layer is the current layer and Control-click on the thumbnail for the Cover Photo smart object to create a selection around it. Then go to Edit > Copy (Control-C) to copy the pixels of the photo in this exact selection shape.

Now it’s time to transfer the cover pixels into the smart object and build up the final effect. I chose to use a high-contrast monochrome effect on the cover photo. You can follow along with that, or build your very own effect instead!

Double-click on the thumbnail for the Cover Photo to open that smart object. Then go to Edit > Paste (Control-V) to paste the copied photo pixels into a new layer.

Use the Quick Selection Tool (W) to create a selection around the figure and the cards to isolate them from the background. Then use the selection to create a layer mask with Layer > Layer Mask > Reveal Selection.

Place in a different background. This can be any image of your choice, but this blurry city street background from Envato Market is an excellent choice.

Make adjustments as you feel are required to the background image. For example, you could add a Curves adjustment layer and alter the curve to significantly brighten the background.

Use File > Place (linked or embedded) to drop in one of the profile pictures. Scale, rotate and position it to fit over one of the cards in the opposite hand. Change the layer’s blending mode to Multiply to allow the photo to blend with the shadowing of the cover photo.

Use the Quick Selection Tool (W) again to create a selection of the fingers, and go to Layer > Layer Mask > Hide Selection.

Place other profile images into the scene in the same way. Mask them out to create the appearance that each card is another photo.

Create a merged layer at the top of the layer stack by holding down the Alt key and going to Layer > Merge Visible. Then transform the merged layer into a smart object with Layer > Smart Objects > Convert to Smart Object.

Go to Filter > Camera Raw Filter and in the Basic tab make the following settings:

Switch to the Effects tab and make the following settings:

After applying the Camera Raw filter, click on the thumbnail for the Smart Filter mask in the Layers panel. Create a selection around the profile pics on the cards, and then fill the selection with black by using Edit > Fill with Content set to Black. This removes the monochrome effect from the photos on the cards.

Save the Cover Photo file and return to the FB Cover Template file. Hide or delete the cover image layer that was used for initial positioning. This should then reveal an updated cover image in the smart object.

Now it’s on to the profile pic! Although Facebook will display the image no larger than 180 x 180 pixels, it is wise to add a larger image. The template is built to handle a profile pic 1000 x 1000 pixels.

Double-click on the Profile-Blank smart object to open it. Notice that the source file is considerably larger than the required 180 x 180. That is intentional as the higher quality the image is, the better the final pic will appear.

Use File > Place (embedded or linked) to deposit your chosen profile pic into the file. Then Save the file, but don’t close it just yet!

Return to the template file to check how the profile image looks. It looks good, but the illusion would benefit greatly from some subtle shadows from the fingers. Keep in mind that there’s nothing you can do about the white border, so the shadows will need to be pretty subtle.

Add a new layer over the profile layer for shadows. Control-click on the profile layer to create a selection in that shape. Then use the Brush Tool (B) with a Soft Round preset with low opacity and a gray color to gently paint in the shadows beneath the fingers.

Use the Move Tool (V) to drag the shadow layer over onto the profile file. Then use Edit > Free Transform (Control-T) to scale the shadows up to fit the larger profile image. If the shadows appear pixelated due to the enlargement, then use the Brush Tool (B) to touch them up.

Save the profile file again and check back on the template file. Delete the original shadows layer and check that the profile image updated to include them there.

Open up both the Profile and the Cover Image smart objects. Use File > Export > Export As and save each file as a JPG with 100% Quality (Facebook will do its own compression).

How did your creative Facebook cover design turn out? Take a screenshot and share it with us in the comments below. 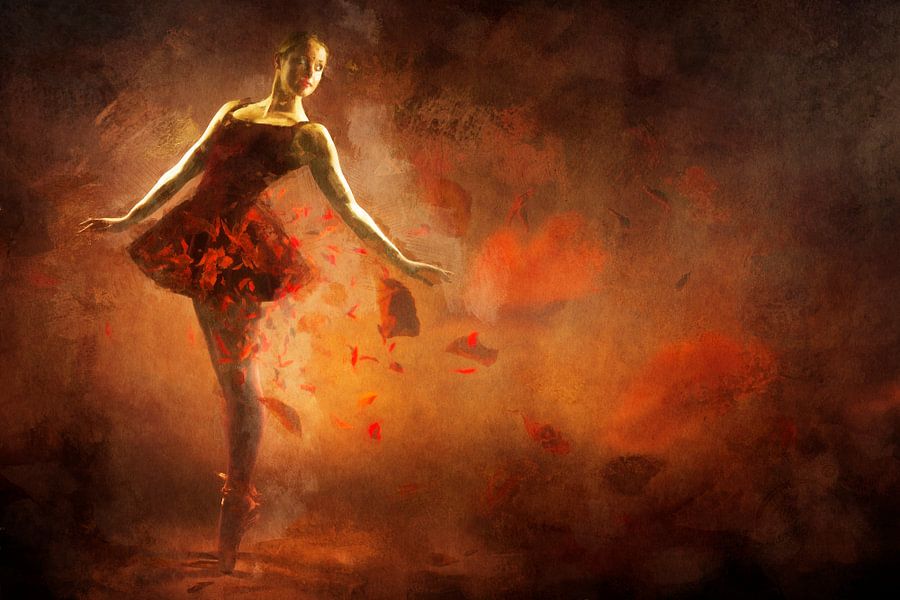